How to help Montreal's homeless and impoverished citizens this holiday season

Like many charitable organizations across the province, Montreal's Old Brewery Mission receives an extra bit of generosity over the holiday season, but while donors mean well, they don't necessarily know what's needed.

Sometimes the needs are more obvious, such as warm clothes and food, but you can't drop off just anything either, and there can also be unexpected items that are lacking.

All in a Weekend host Sonali Karnick spoke with Matthew Pearce, director general of the Old Brewery Mission, to find out what the men's homeless shelter needs right now.

SK: What kinds of clothing does the mission need?

MP: The kind of clothing we need around this time of year is winter clothing, as you might imagine: scarves, toques, gloves, coats, etc.  All of them in good condition and washed, as well. I think it's it's important to understand that we recommend you don't donate something that you wouldn't wear yourself or that is is no longer wearable. If it's torn or stained or that kind of thing. Our interest is giving people good clothes so that they feel that they look OK and respectable. We don't have the facilities to do the laundry for the clothes that are coming in. We have laundry machines but that that's going full time to keep the bedding clean at the shelter.

Dropping off children's toys and children's clothing only adds the burden to the mission of having to transfer it somewhere else. Don't don't give us children's stuff. 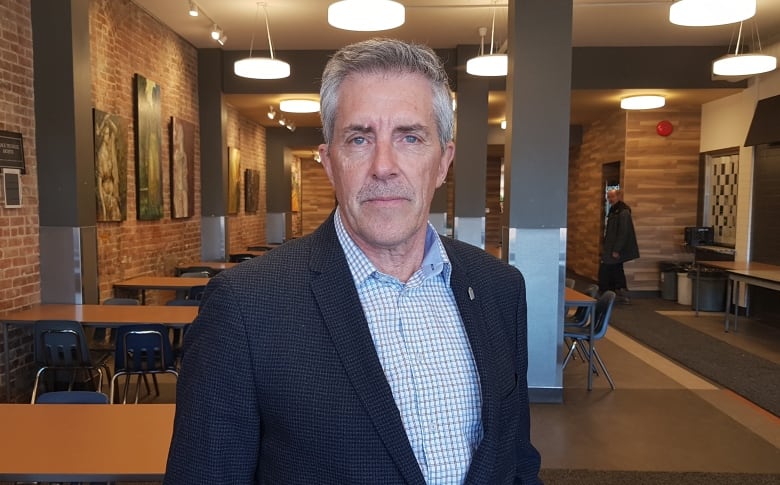 Matthew Pearce, president and CEO of the Old Brewery Mission, says many people will donate women's clothing to the mission, despite it being a men's shelter. (Benjamin Shingler/CBC)

SK: What about food items?

MP: We serve 400,000 meals a year and so we don't need a shopping bag of groceries. Those kind of things are very helpful for food banks but for us we need industrial quantities of food. Some of your listeners may know or even work in food wholesalers who deal in larger volumes in large quantities, that's a fantastic donation but we'll need like a pallet of tomato sauce, for example, or we'll need large quantities to serve our supper (we serve about 400 people). Food banks can can use those smaller donations.

SK: And if people organize their own meal there in memory of somebody or for a birthday party or for a good deed they can go and do that. Do you organize the supplier for the food in that case or can they find their own supplier?

MP: Both but will we have a meal available every morning, every midday and every suppertime. If the donor wants to bring the food then they can contact us and we'll tell them about the quantities and so on. Our kitchen staff will help make it, and if they don't want to buy it themselves, then we'll have the food on hand. 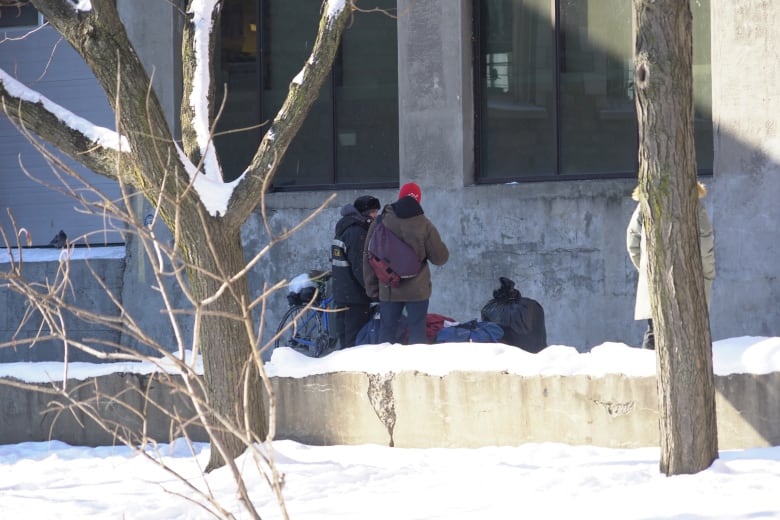 Advocates say there are up to 3,000 homeless people in Montreal, and while they all do not live on the streets, the cold weather creates an influx of people looking for a warm bed. (Charles Contant/CBC)

SK: When we're making donations, what personal hygiene items are the most useful?

MP: Well what we say, of course, is everybody needs toothpaste and shampoo and those kind of things.  Homeless people are no different than anybody else in that regard. But what we aren't able to use well are the larger formats. Somebody may think, "Oh I'll get the huge tube of toothpaste or a box of large tubes." What we need are the smaller ones so people can stick them in their pockets and take it with them. Same with shampoo, small ones that they can put in their locker at the Old Brewery Mission and take with them to the shower. Disposable razors and shaving cream, that kind of thing.

SK: Many clients have to get around town from the shelter. What can help them out?

MP: A combination lock (with the combination attached) or a lock with a key.  Bus passes and Metro passes are really helpful. We can give that to someone who's heading out to a job interview, heading out to a medical appointment or heading out to look at an apartment that they're hoping to get if they can get themselves on the Metro and back. Our counsellors can hand them out to people they're working with.

SK: One item that you mentioned to me that I that I've heard before from people who've lived in and out of shelters is earplugs?

MP: Well you can imagine we're trying to get rid of these dense, packed shelters. We don't think they're very humane living conditions. They serve a purpose, it's true, but we're trying to reduce that. In the meantime, we haven't got rid of it yet which means we do have some large dorms. When you've got another 70 people in the room with you there's noise,  let's just say it includes snoring! It's really helpful to make sure somebody gets a good night's sleep. A good night's sleep helps you look at the next day in a different way.

SK: If people were going to donate gift cards to the Old Brewery Mission, what would you be looking for?

MP: Gift cards are terrific things to be able to hand to people for coffee shops that get people out into the city and into an environment where they can do what normal people do. You can go to a coffee shop and get a coffee, so can they. Grocery store gift cards are really helpful because that's useful for people who are in housing and housing is the biggest thing the Old Brewery Mission does now. That's our biggest program, supporting people who have moved out of homelessness they're in housing but they're still in poverty, most of them. If our counsellors can drop off a grocery card and say, "here, this came from a donor," that's really really helpful to them.