The Montreal neighbourhood of Park-Ex has long been a landing point for new arrivals to Canada.

Today, Orthodox churches and souvlaki restaurants mix with halal butchers, Pakistani tailors and dosa joints on busy streets of the area, also known by its full name Park Extension. Most of the Greeks who settled here in the sixties and seventies moved to the suburbs decades ago, and it is now primarily home to Pakistani, Indian, Sri Lankan and Bangladeshi communities.

"Neighbourhoods always change. That's not the problem. But when it happens very, very fast – then we have a problem" – veteran Quebec housing rights activist François Saillant's take on Park-Ex's rapid gentrification #mtlpol #polmun

Another wave of new residents is changing the makeup of Park-Ex once again. Over the last several years, young families and professionals from other Montreal neighbourhoods have flocked to the area, enticed among other things by cheap rent.

With the highest concentration of immigrants of any Montreal neighbourhood at 61 per cent, Park-Ex is the city’s lowest-income neighbourhood. Forty-four per cent of the population lives under the poverty line, according to a 2016 Centraide study. In 2013, an income mapping project compiled by Global News ranked it the fifth poorest neighbourhood in Canada.

Now, gentrification is being turbocharged by construction of the University of Montreal's new science campus, just visible in the skyline behind the colourful storefronts on Jean-Talon Street. Built on abandoned rail yards on Park-Ex's southern border, the campus is on track to open September 2019. A decade in the making, the campus is expected to draw an estimated 10,000 students and employees to the area.

Local housing activists are calling on the government to build social housing in the neighbourhood to protect Park-Ex's most vulnerable residents from escalating property prices and a frenzy of property speculation.

"Gentrification is a danger everywhere, but in the case of this neighbourhood I think it might be worse because of the population," said retired housing activist Francois Saillant, who has just published a book on gentrification in Quebec. "It's particular in Park-Ex I believe because of the high percentage of new immigrants. It's a situation that is different. These people are really vulnerable. Often they don't have big income and they are fighting to be recognized as Canadian citizens."

He added that "neighbourhoods always change. That's not the problem. But when it happens very, very fast – then we have a problem."

As the neighbourhood has become more fashionable in the last years, property prices have skyrocketed, explained Alexandre Cadieux, who works for local housing advocacy group Park Extension Action Committee (CAPE). New landlords are snapping up rental properties in the neighbourhood and are trying to get current tenants to move out “by all means possible,” in order to raise rents.

Among the tactics are allowing apartments to fall into disrepair, allowing the spread of mould or infestation by cockroaches, rodents or bedbugs, or taking advantage of a tenant’s shaky understanding of French, English and Quebec tenants’ rights to persuade them they have to move out.

He said the CAPE is currently working with 30 different rental households who feel their landlord is hassling them or trying to evict them and believes there are many more. One client who was evicted recently was paying $450 a month for a home for his family; that property rent now is more than $900.

Despite the CAPE’s recommendations, he said many residents will not report their housing situation or take their case to the Quebec’s rental housing tribunal for fear of imperiling their chances of obtaining immigration papers or refugee status – “and landlords know it.”

Social housing is the key way to protect Park-Ex’s low-income residents, said Cadieux. "Otherwise the situation will just continue to deteriorate and it will be the low-income households who suffer.” The CAPE are calling on the City of Montreal to build 225 social housing units promised for the areas adjacent to the new campus in a 2013 report.

Fifty-four of those units are on track to open in a housing cooperative and are set to open in May. But because they were planned before the 2013 report, Cadieux said it was “hypocritical” that the 54 are being counted towards the 225.

Saillant agreed that social housing is a key buffer against gentrification. “The biggest solution for me is social housing, massive amounts of new social housing and the transformation of apartments into social housing,” he said. “Mr. Trudeau as prime minister but also as MP for that neighbourhood has something to do with that.” Park-Ex is in Prime Minister Justin Trudeau's riding of Papineau.

Only 51 social housing units have been built in Park-Extension since 2005, according to the CAPE. 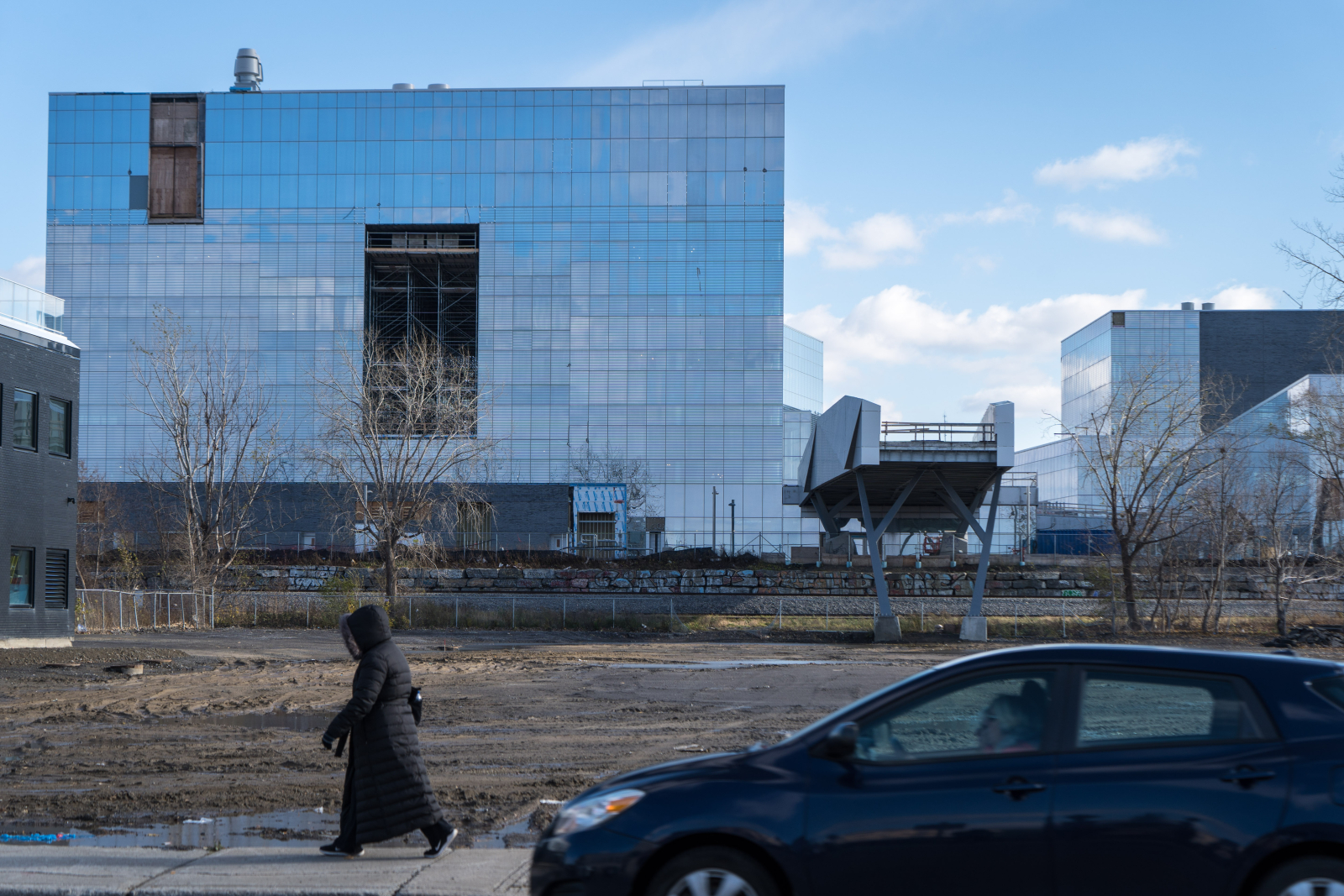 The growing University of Montreal science campus which borders Outremont to the south and Park-Extension to the north on 10 Nov. 2018. Photo by Josie Desmarais

The City of Montreal narrowly missed out on acquiring 120 social housing units for Park-Ex when it was outbid by real estate developer Montoni for the site of an old kosher bakery on Beaumont Street, on the southern tip of Park-Ex, in February this year.

Marc-André Fullum, Montoni’s director of urbanism and development, told National Observer that the ground floor will be commercial and the top three floors would be rentals, potentially for students. Rents will be decided only after talking to local groups and analyzing market studies, he said. He added that Montoni is working with local community housing group HAPOPEX to learn how their building can best service the community, and that Montoni planned to offer space to community groups “at reduced prices” on the ground floor.

Fullum said the company chose the building because “it would be a plus for the area to save the history of the building” and not because of the opening of the University of Montreal or to cater to employees of technology companies moving to the nearby Mile-Ex district. He said that at the time he “didn’t even know that the university was going there.”

Faiz Abhuani, a community housing activist living and working in Park-Ex, told National Observer that he would like to know where the money earmarked by the City of Montreal for that purchase has gone. “They put away over $4 million to develop that site […] But the question is, where is that money? Because it could be used for another project. Who is following up? Are there other opportunities that are being sought out? There’s no accountability. We don’t know who to ask for that money, and there’s no control of how that money is used.”

Abhuani is the director of a non-profit organization Brique par Brique, which has raised over $350,000 in community bonds to cover the downpayment for a yet-to-be-acquired apartment complex in Park-Ex that would be rented to those most vulnerable to gentrification. It is the largest amount of community bonds ever issued in Quebec, and the group is just $50,000 shy of its target.

The challenge currently is finding a building that works for their purposes. “The market is very competitive,” Abhuani said. “It’s very difficult to get a property that is in decent shape, for a price that is reasonable, because our competitors are all paying prices on expected income which is much higher than we are able to solicit from residents.”

He has witnessed this phenomenon before. “I grew up in Mile End (a neighbourhood one kilometre south of Park-Ex). My parents came from East Africa, they were refugees and they settled as a community in Mile End and they had a mosque and a community centre,” he explained. That all changed when McGill expanded its programming in the early nineties, the city’s economy began to pick up and Mile End became “very hip and very sought up.” His parents were “one of the last to leave, and no one from our community is left there.” 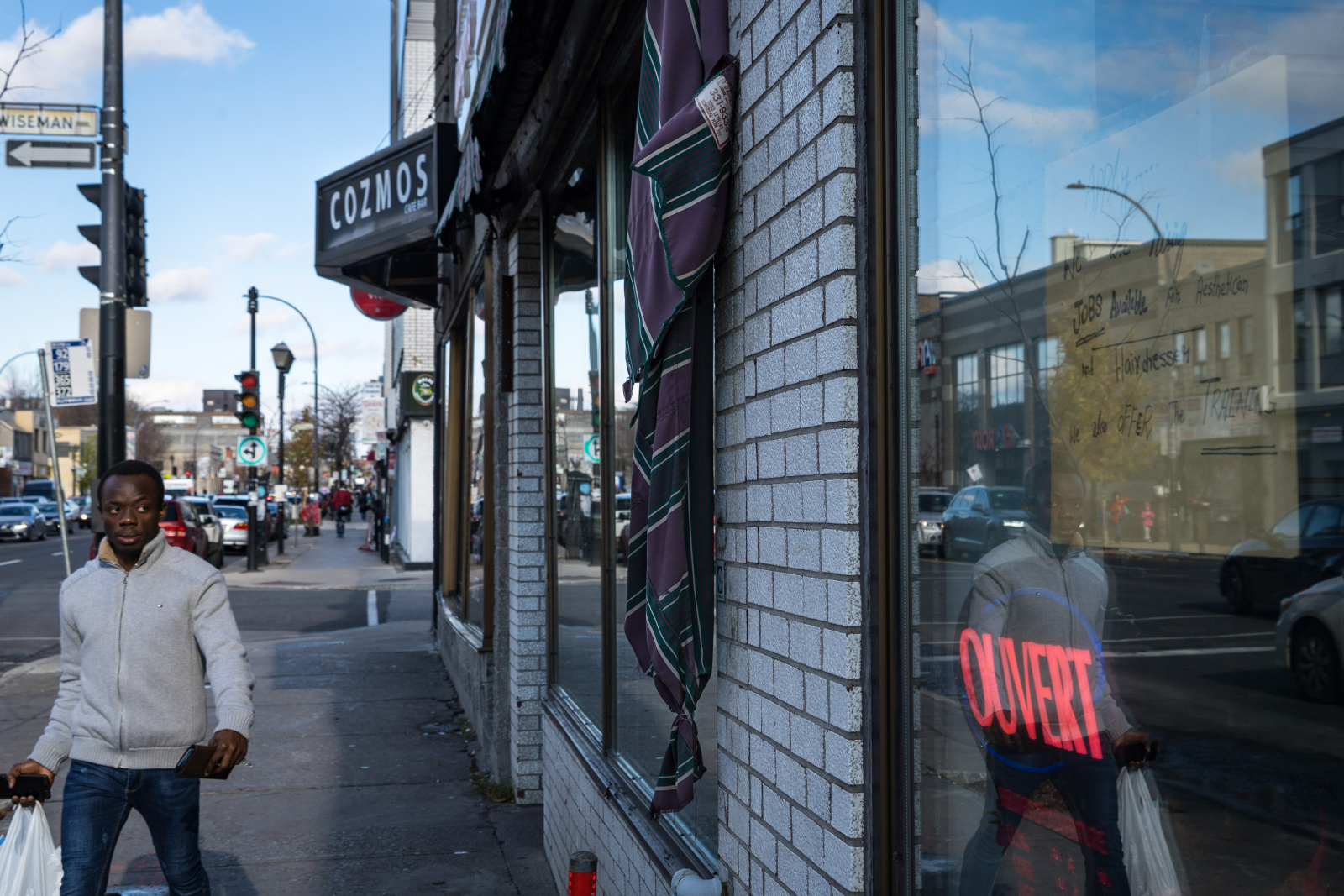 Jean-Talon Street in Park-Extension, a neighbourhood in Montreal on 10 Nov. 2018. Photo by Josie Desmarais

Park-Ex is home to 29,000 people and is Montreal’s most densely populated neighbourhood, with four times the average population density of Greater Montreal area. Park-Ex local councillor Mary Deros told National Observer that lack of space is one of the key reasons for the dearth of social housing in the neighbourhood. She said she is “looking” for new places for social housing and is working with Magda Popeanu, the City of Montreal’s housing point person, to move the file forward.

Deros said that it was not solely the City of Montreal’s responsibility to build and find locations for social housing. “I don't say no to these developments, and I encourage them, but instead of sitting back and complaining I want [the community housing groups] to be proactive, I want them to come to us with projects, I want them to sit down and find the financing.”

Deros, who is a property owner in Park-Ex and has lived in the neighbourhood since she was 16 years old, said that it is only natural that old properties are renovated and rented out at a higher price. “It’s a circle. Call it a vicious circle. It’s the circle of life. You create something, you modify it, there are costs associated to the modifications. Unfortunately it’s the consumer who pays.”

Overall, Deros said that she is “not concerned, because we don’t want Park-Ex to be a ghetto. We want there to be a ‘mixity’ of people. Considering other areas where there is a boom in condos, we don’t have that Park-Ex. I’m more concerned about improving the existing buildings.” She said the opening of the campus will have a positive effect on local businesses.

University of Montreal spokesperson Genevieve O’Meara said that the university is aware of the impact it will have on nearby neighbourhoods. However, she is positive that it will “change the face of those neighbourhoods for the better,” pointing to studies that demonstrate that “when a university installs themselves in a neighbourhood, it brings benefits.” These include public transport improvements.

The science campus is aiming for LEED (leadership in energy and environmental design) certification, and parking will be limited to 400 spaces to encourage use of public transport. Cycling paths are also planned.

The university is involved in community outreach initiatives that include urban agriculture on the campus and a program where elementary school students in Park-Ex have weekly one-on-one hour-long sessions with university students studying education. 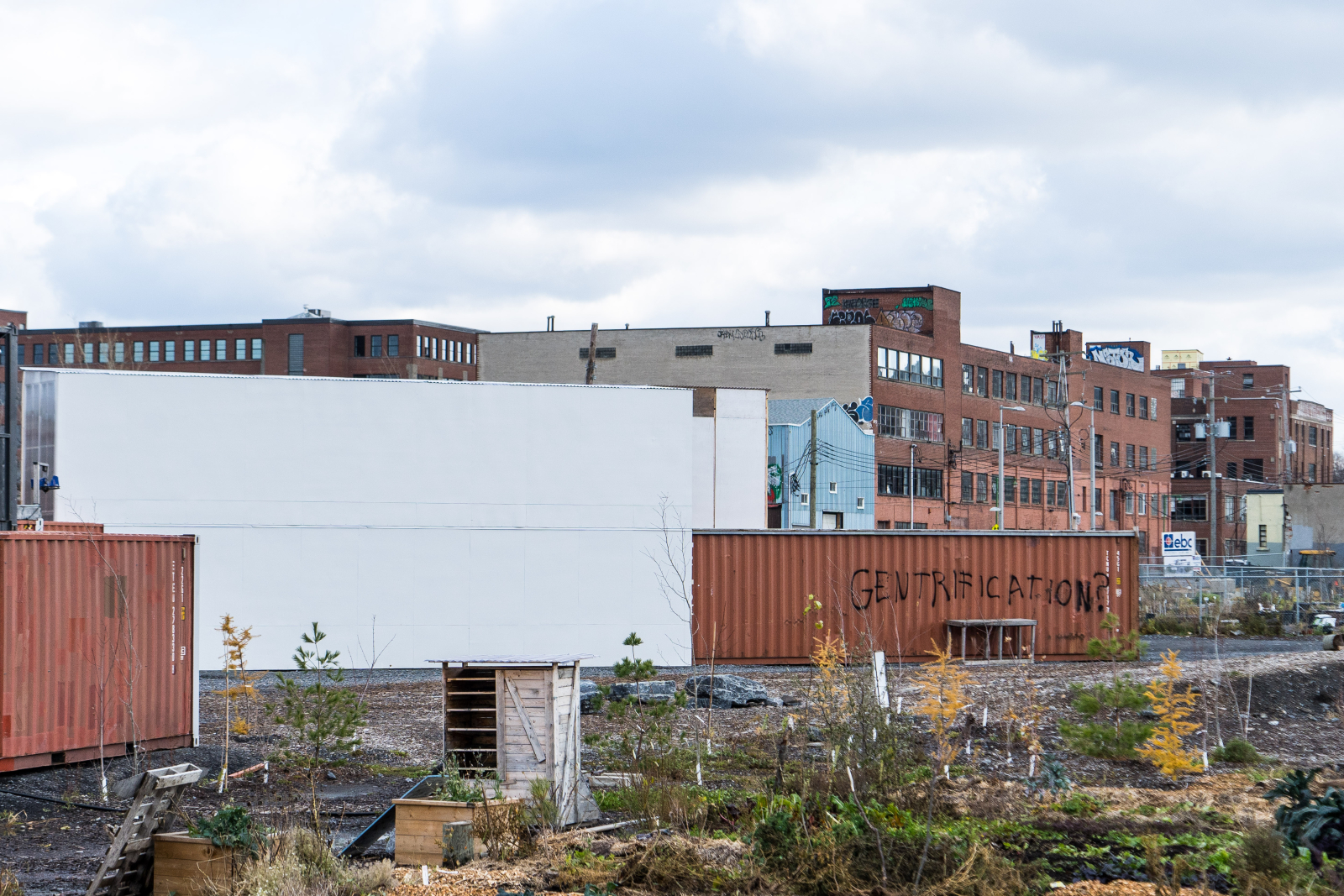 Community gardens on the fringe of the east end of the University of Montreal campus on 10 Nov. 2018. Photo by Josie Desmarais

Aaron Vansintjan, a Park-Ex resident who researches gentrification at McGill, said the addition of extra bike lanes to the neighbourhood will result in 'eco-gentrification,' a phenomenon where the addition of green spaces in a district brings up its living costs and eventually displaces its original inhabitants.

The High Line in New York City, an old railway line that was transformed in 2009 into a park and vegetative walkway, is a well-documented example of eco-gentrification. The five million visitors that enjoy the path each year have pushed prices up in the surrounding area and forced small businesses and residents to move.

That’s not to say urban greening should be stopped, Vansintjan said. “That’s a false dichotomy, because if the city starts funding [green] projects like these, they could just as well improve tenants’ rights, take certain places out of the market and offer spaces for community groups.”

“There are many types of things the city can do at the same time.”